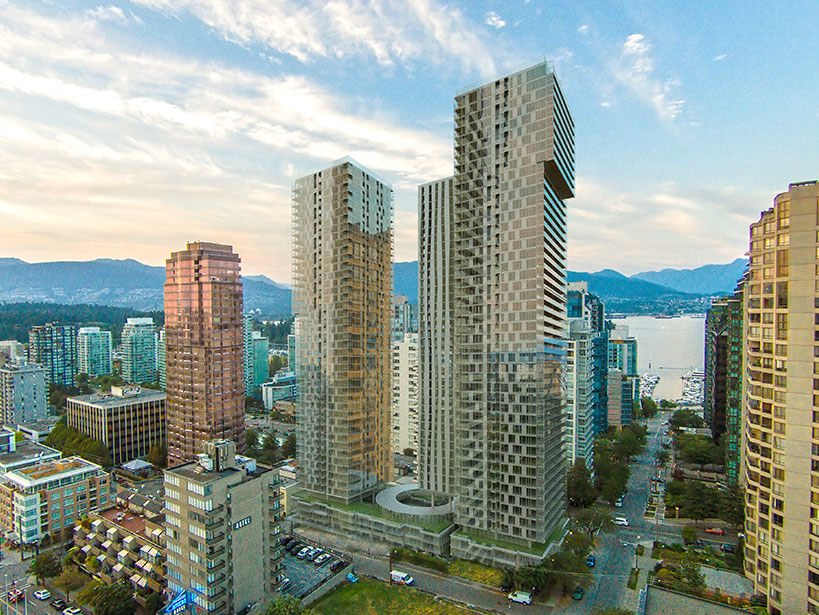 Some interesting renderings have surfaced for an extremely valuable redevelopment site in Coal Harbour that has been in the news lately.

1444 Alberni Street, currently home to a 1970s-era rental apartment tower, along with an office building at 740 Nicola St., were first acquired by Wall Financial for $83.5 million in 2014.

Then, just last month, the site was re-sold to a new buyer, rumoured to be Hong Kong-based Asia Standard International Group and Vancouver-based Landa Global Properties, for almost double the price: $160 million.

These renderings are for the previous scheme by Wall Financial and were created by Perkins+Will. That scheme called for a two tower development with a podium featuring childcare space. That design has since been scrapped by the new owners and a new architect has been brought on.

Musson Cattell Mackey Partnership (MCM) are now working on a new proposal for the site, which is yet to be revealed. MCM has been involved in the designs of the Trump Tower and Bentall 5, among other high profile developments.

It will be very interesting to see the latest proposal for the site, but in the meantime, enjoy these beautiful renderings of what could have been… a beautiful looking proposal nonetheless.