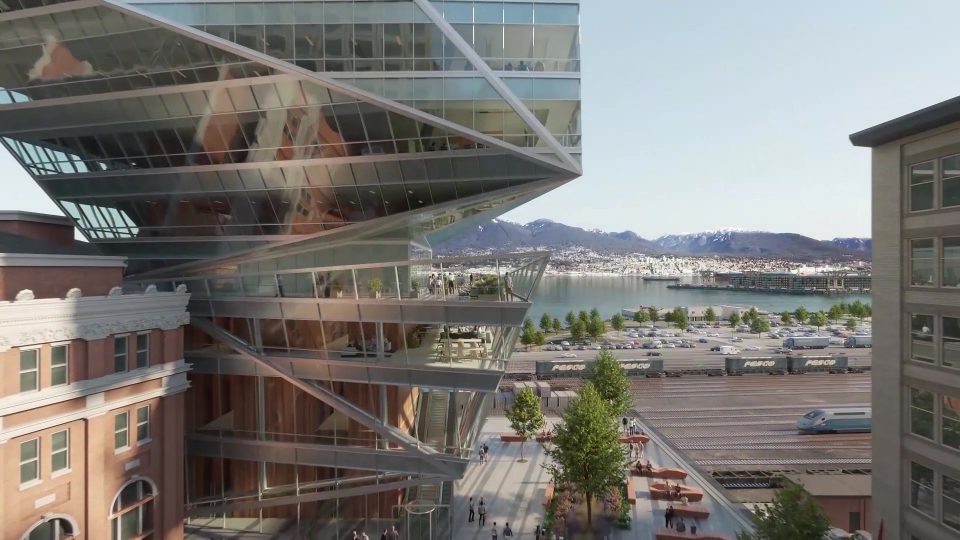 Cadillac Fairview is planning a landmark 26-storey office tower next to Waterfront Station, known as The Crystal at Waterfront Square.

The office tower at 555 West Cordova has been in the works for years, and a previous design was rejected by the Urban Design Panel in 2015 due to concerns about how the proposed building interacted with the historic Waterfront Station, as well as the loss of public views and space.

Now, a revised development application has been filed with a slightly tweaked design. Cadillac Fairview says the reconfiguration allows for 85 per cent of the current surface parking lot to be repurposed as an open civic square, hence the name “The Crystal at Waterfront Square.” There will also be a publicly-accessible viewing terrace on level four, with water views to the North Shore.

“This site sits at a ‘pivot point’ between downtown, Gastown and the waterfront — the building is a 3D puzzle that needs to be addressing those things,” says Gordon Gill, design partner and co-founder of AS+GG (Adrian Smith + Gordon Gill Architecture).

Gill says the design team has listened carefully to public feedback from the first iteration, and incorporated it into the revised design.

“We shrunk the floor plate of the building with the goal of increasing the plaza open space from 73 to 86 per cent. In the process of doing that, we didn’t only increase the public open space, we celebrate the façade of Waterfront Station,” he says, explaining how the second iteration of the tower has been pushed north of the east façade of the station.

Gill says they are trying to achieve a project that not only enhances the skyline, but pushes the boundaries of architecture in Vancouver and creates a dialogue that gets people talking.

Renderings: The Crystal at Waterfront Square

The tower design has also been rotated to allow for greater visibility of the heritage façade of Waterfront Station.

Adrian Smith + Gordon Gill Architecture, also known as AS+GG, are on the project, as well as B+H Architects.

Cadillac Fairview is touting the sustainability features of the project, which include:

“The Crystal at Waterfront Square is another example of Cadillac Fairview’s commitment to designing and operating a world-class building that contributes to a vibrant and sustainable city,” said Tom Knoepfel, senior vice president western portfolio at Cadillac Fairview, in a press release.

“Cadillac Fairview is and has been a long-standing developer, owner, and manager of both retail and office properties in Vancouver and we’re proud to be carrying on that tradition with this landmark development that will bring to market much needed class A office and commercial space in downtown Vancouver,” added Knoepfel.

The project supports the City of Vancouver’s HUB framework plan for the waterfront, which aims to create an extension of downtown at the waterfront, over the tracks and north to the harbour. The design of the plaza and the tower location allows for a future northbound street connection from West Cordova to the waterfront.

Landscape architecture is by PFS Studio. The project heads to the Development Permit Board on Monday, May 25, 2020 at 3:00 p.m.

Cadillac Fairview says it hopes to commence construction in 2020. The company is the largest commercial property owner in Vancouver, with over four million square feet of retail and office space, and also recently announced it would be rebranding the former Four Seasons Hotel with a new lifestyle hotel brand.