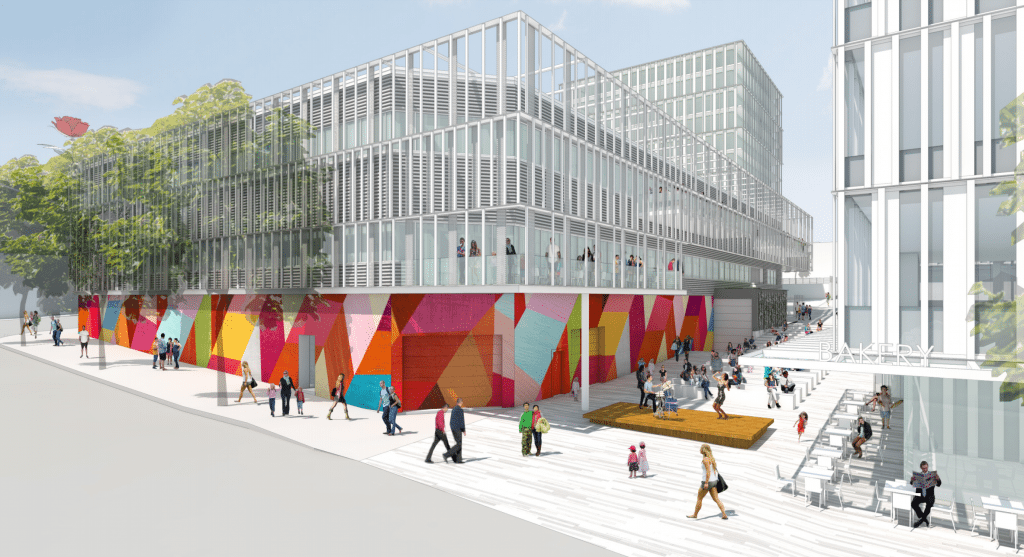 Westbank and Henriquez Partners Architect has applied to the City of Vancouver to makeover an office building on Main Street, in what looks to be the first part of a new campus for Hootsuite.

Developer Ian Gillespie of Westbank partnered with Hootsuite CEO Ryan Holmes in 2015 to purchase a full city block bound by Main, Quebec, East 4th and East 5th Avenues. The intention is to develop a high-tech campus for Hootsuite — which is located on the same block — and likely other digital and technology companies. The concentration of tech companies in Mt. Pleasant has been nicknamed “Mount Pixel.”

The application proposes to alter the façade of the existing office building at 2015 Main Street (formerly the RBC Visa processing centre, in service since the 1960s). The redevelopment will include the addition of new balconies on the west façade, adding a “living screen” to the perimeter of the building, as well as new landscaping.

The proposed design includes the redesign of a more defined, active and secure building entrance and the opportunity for public art in the form of a mural, as well as on top of the building. In combination with the proposed ‘living screen’, the developer says these new design elements will help activate and breathe new life into the existing building, streetscapes and laneway.

“The renovation of 2015 Main Street is the catalyst for the multiple phase campus development at Main and 5th Avenue,” reads the application.

The changes are aimed at extending the building’s life for another 10-15 years, and integrating the building into the “wider digital campus proposed for adjacent sites.” Future campus buildings will be subject to their own development permit processes.

The site is directly adjacent to the recently rezoned (I-1A & I-1B) industrial area, at Quebec Street between E. 2nd & E. 6th Avenues. The City of Vancouver has designated the area to allow digital entertainment and information technology use. The Mount Pleasant community plan has identified the Main Street corridor in this location as a prime zone to add density while promoting arts development and livability.

Hootsuite is a platform for managing social media, created by Ryan Holmes in 2008. It has close to 1,000 staff located in Vancouver, London, Singapore, and other countries. The company has more than 15 million users in over 175 countries.