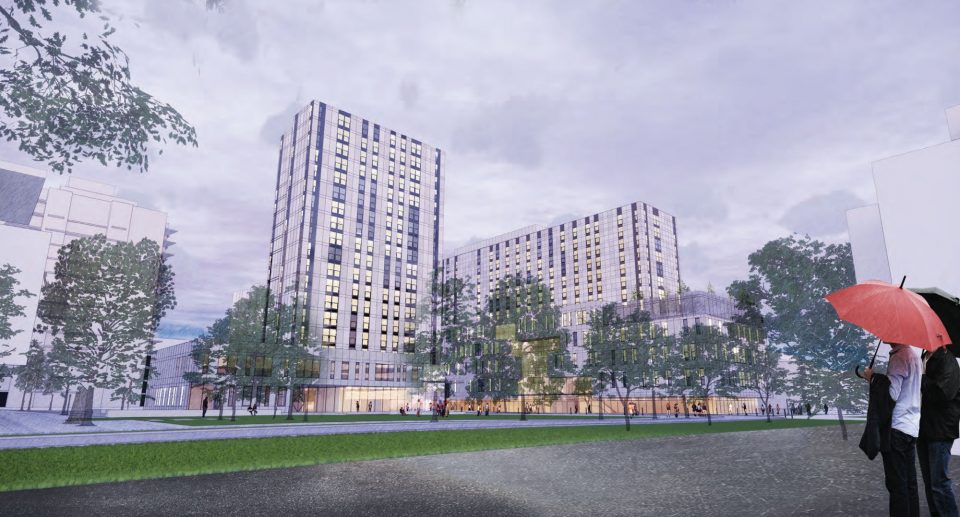 Student housing at UBC is about to get another big boost, with plans for 600 beds in two new buildings on Walter Gage Road.

The proposal, known as Brock Commons Phase 2, includes an 18-storey north tower and a 13-storey south tower, situated between the Peter A. Allard School of Law and Brock Hall.

The 600 new student beds in Brock Commons Phase 2 will be joined by new academic and institutional space, with plans showing an arts advising area, classrooms and offices.

It also appears UBC Equity and Inclusion may be moving into the new building, with office space allocated on level four of the south tower.

The development should go before the Board of Govenors at the September 24 meeting.

Construction on the new student housing should start in Spring 2020, with an anticipated completion date in Fall 2022.

Interestingly, plans also show a new, proposed location for the Arts Student Centre, which was originally planned for a treed area known as The Bosque, before the plan was scrapped due to concerns over the removal of several trees.

This proposed new location will go before the Board of Governors in September 2019.

It’s not clear if the building will be redesigned for this potential new location, but here’s how it looked when it was slated for The Bosque:

UBC has been steadily adding new student housing beds at its Point Grey campus. In February, the university announced almost 1,000 new student beds in five buildings called the Pacific Residences, to be built around Gage Towers, at Wesbrook Mall and Student Union Boulevard.

Next door to Gage Towers, students are already moving into The Exchange Residences for the first time, a new, 650-bed building with a transit facility incorporated into the ground floor.

With rents in Vancouver at all-time highs and vacancies hard to come by, it’s clear UBC sees an opportunity to house more students on campus.

How many students live on campus?

Video: Student housing at UBC by the numbers