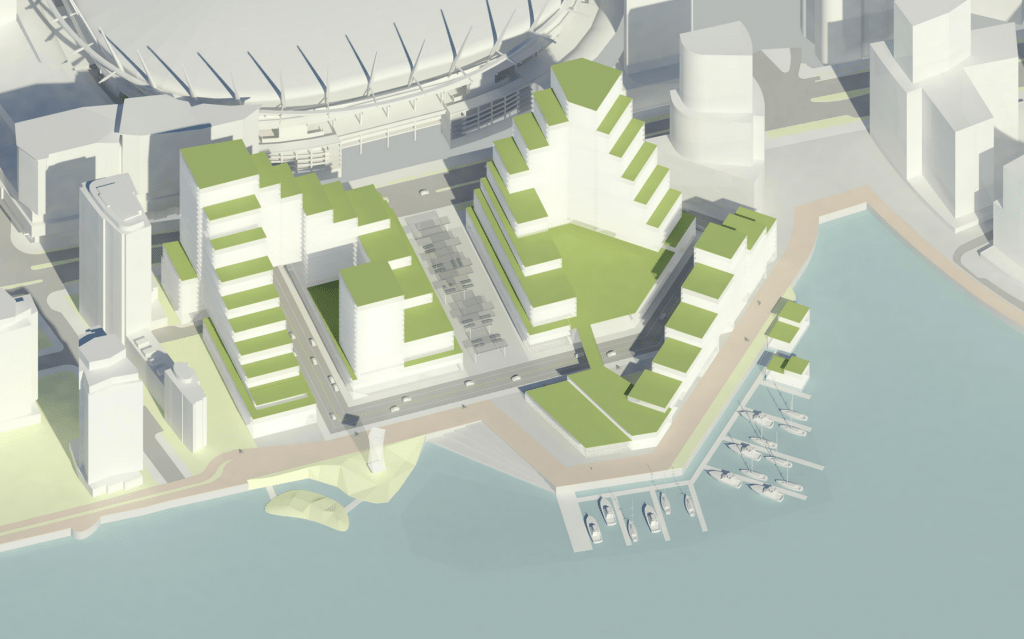 The current site of the Plaza of Nations is set to be transformed into a large mixed-use development of terraced buildings.

Canadian Metropolitan Properties and James KM Cheng Architects are proposing to rezone subarea 6B to develop the 10.28-acre site based on the Northeast False Creek Draft Area Plan. Concord Pacific is also proposing a mixed-use “Waterfront Entertainment District” adjacent to the site, in a separate rezoning application.

The architect says the design of the area is a departure from Vancouver’s standard tower-podium typology.

“The Plaza of Nations masterplan proposes a fluid and continuous terracing landscape that enhances the backdrop of the North Shore Mountains. Strategically positioned to capture natural sunlight, this habitable topography wanders along the seawall providing new pedestrian infrastructure, multiple public spaces and stunning views to the city and False Creek’s Waterfront.”

The development at 750 Pacific Boulevard will include:

The Northeast False Creek draft area plan calls for a maximum floor area of 1.7M sq. ft. of residential and non-residential uses on the site, not including civic facilities. As well, a minimum of 350,000 sq. ft. of new non-residential job space must be delivered.

The district is envisioned as connecting BC Place to the waterfront. An open public space — partially covered — is planned for the centre of the site. A pedestrian connection across a widened and upgraded Pacific Boulevard is also proposed.

An active urban pedestrian waterfront will be formed by stepped and terraced buildings that descend westward toward the water’s edge. The waterfront promenade buildings will offer public uses including a hotel and a concentration of restaurants, shops, upper level offices and amenities.

The buildings will be designed with a series of publicly accessible rooftop terraces ascending and connecting the seawall to upper level restaurants and gardens. Floating restaurants will further activate and engage the waterfront.

A focal point of public life will be a new community centre and ice arena that will be provided in the blocks between the waterfront and the stadium.

Comments on the proposal can be left on the city’s website.