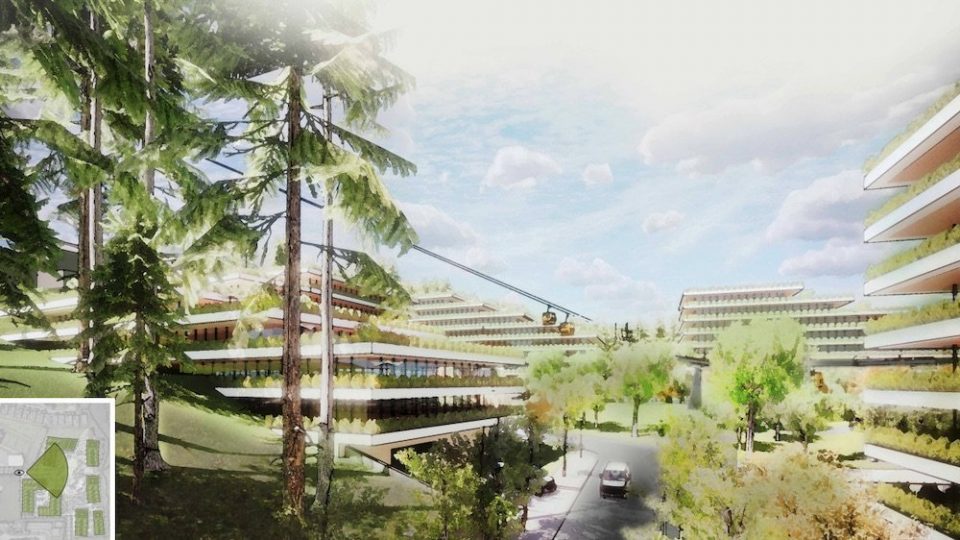 An upcoming development on the mountainside in West Vancouver could pave the way for a gondola connecting the community to Dundarave Village.

Henson Developments, along with GBL Architects and PWL Landscape Architects, are behind plans for the ambitious project next to the Collingwood School in West Vancouver.

The Wentworth Lands, as the property is known, is comprised of four lots located between the Collingwood School and the Marr Creek Ravine. The total site area is 8.95 acres.

The concept is a mixed-tenure community — meaning strata and rental housing — and possibly mass timber construction. The developer says it envisions a project “that blends into the unique landscape of West Vancouver” and helps address the community’s extremely low vacancy rate — currently at 1.2 per cent, and with an extreme shortage of rentals suitable for the workforce, such as local firefighters, teachers and other public servants.

The vision for the Wentworth Lands includes:

The developer is also proposing a one-acre park dedication, as part of the Marr Creek Ravine reserve, retaining the lands in their natural state.

A significant central portion of the site will be maintained as public open space.

The developer says the proposal is designed to allow West Vancouver to consider a future gondola connection from the site to Dundarave Village. However, funding for such a project has not yet been secured and it’s unclear on what the appetite for a gondola would be.

TransLink is currently studying the idea of constructing a gondola from the Production Way SkyTrain station to the SFU campus atop Burnaby Mountain.

The proposal includes strategies to mitigate traffic, including new connections to transit, design to accommodate a potential gondola, and reduced parking rates for rental housing to encourage other modes of transportation. Henson says it will work with Collingwood School to explore improvements to the school’s parking lot to ensure efficient access through the site.

The next step for the project will be a formal application submitted to the District of West Vancouver.

This is not the only major hillside residential development planned in West Vancouver. British Pacific Properties is planning a 12-storey luxury condominium inspired by a “tree house” at Rodgers Creek, just off Cypress Bowl Road.

This is the second high-profile project for Henson Developments. The developer is behind plans for a 60-storey, passive house tower in downtown Vancouver, across from Nelson Park.

The tower’s “vertical forest” architecture caused a stir in the city’s development community when it first surfaced in 2019.