Concord Pacific is moving forward with phase two of Concord Metrotown on Kingsway, at the northeast corner of the Metrotown mall parking lot.
Condos

Plans to demolish one of the oldest apartment buildings...
Real Estate Insights

If you’re looking to move to Canada but unsure where’s best to live, this handy guide to the best regions to live in will help you.

A slender and striking 43-storey residential tower is proposed for a mid-block site on Alberni Street in Coal Harbour, a neighbourhood quickly transforming into an architectural showcase.

Landa Global Properties is teaming up with Asia Standard Americas on the tower, which was designed by SOM Architects and IBI Group.

The site, which is occupied by a 15-storey apartment tower, was originally proposed to be redeveloped into a 100 per cent market rental tower by its former owners Hollyburn Properties. However, Hollyburn abandoned the plans and decided to sell to Landa Global in 2018.

The latest proposal, for which a pre-application open house was recently held, will see all 66 rental apartments currently on the site replaced, and the addition of 197 market strata homes in a 43-storey tower, with a five-storey podium.

Most of the units — 65 per cent overall — will be two bedrooms or larger and suitable for families.

All of the current tenants will be eligible for financial compensation and moving expenses under the city’s Tenant Relocation and Protection Policy.

The developers say the project “will bring a unique and distinctive design, establishing a recognizable presence on the Vancouver skyline.”

The architects state that the building has been “sculpted to preserve views to the North Shore mountains,” and that “the goal of the design is to create a simple, slender tower silhouette which maximizes on views and provides units with ample sunlight during the day.”

There will be 245 underground parking stalls and 560 bicycle parking spots.

The upcoming development is within several blocks of Alberni Street that are set to see major transformation in the coming years.

Directly north of the site, the White Spot restaurant property will be redeveloped with two, 38-storey towers.

Adjacent to the White Spot site, Anthem Properties is planning a 33-storey tower on the former Chevron service station site.

To the east on Alberni Street, construction on Kengo Kuma’s 43-storey tower is well underway.

The sloping façade of the ultra-luxury tower will be clad in aluminum panels and include extensive use of timber. The developer is Westbank.

Another block away, Landa Global and Asia Standard Americas are planning two residential towers (48-storey and 43-storey) at 1444 Alberni Street.

The buildings will have a dramatic, New York-inspired design.

Bosa Properties and Kingswood Properties are also planning to launch Fifteen Fifteen — commonly referred to as the “jenga tower.” 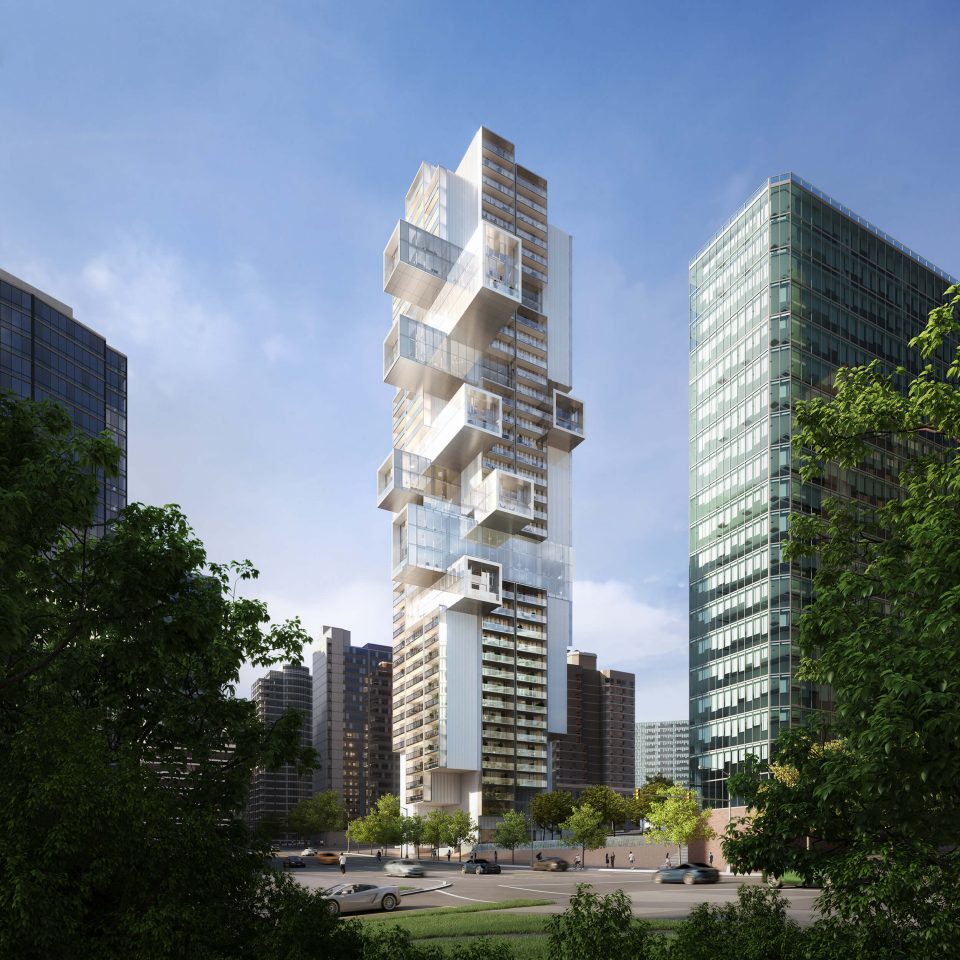 And if all those proposals weren’t impressive enough, there more changes on the way to the neighbourhood, including a spectacular design for a flatiron tower designed by James KM Cheng Architects.