“Owning less and living more:” How carsharing can improve life in Vancouver

Enhancements to the Granville Street bridge also include wider sidewalks, a new street network and traffic signals at the on and off-ramps.

Worry free trips to the store, your mom’s or the mountains — just a few reasons why carsharing has become entrenched in the fabric of modern Vancouver life

The dense, bustling cities of New York, Chicago and San Francisco have got nothing on Vancouver — at least not when it comes to carsharing. In fact, no North American city does.

Our city enjoys almost 1,000 more carsharing vehicles than Montreal, and we’ve got nearly twice as many as Toronto, the largest metropolitan area in Canada.

But the carshare revolution is more than just a numbers game. There are tangible reasons for its popularity: carsharing has fundamentally improved life in our fair city.

From helping counter regional unaffordability, to supporting sustainability aims and providing its members with convenience and peace of mind, carshare culture has proven a linchpin to modern life in Vancouver.

“We were the first carshare in the region 21 years ago with two cars and 16 members,” says McLachlan. “And we now have 20,000 members, and more than 600 vehicles in 20 municipalities in the Metro Vancouver and Island regions.”

For many living in Vancouver, navigating the unending pressures of unaffordability is a daily reality.

Does this sound familiar? Sky-high rent, new construction prices north of $1,000 per square foot and gas prices hovering around a $1.60 per litre. Then there’s the string of rate hikes from ICBC that will eventually cost drivers an extra $130 per year.

Couple those mounting forces with a median household income just shy of $77,000, according to the provincial government, and the need to save money at every opportunity is paramount. The good news? Joining a carshare service is an avenue for significant savings.

“I think the impact, in particular of two-way (round-trip) carsharing, and the alternative it offers to private car ownership is huge.”

The average Modo member spends $600 a year on the service. Booking a Modo vehicle costs as little as $5 per hour, up to a maximum of $50 per day, including gas, insurance and privileged parking. 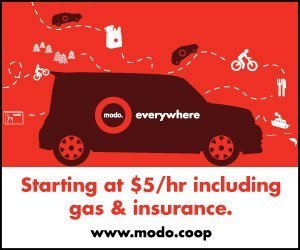 Compare that with stats that peg the average yearly cost of $9,500 to own and operate a car in B.C. — including expenses such as parking, depreciation, but not (knock on wood) major maintenance — and drivers could save as much as $600 per month.

“If you can put $600 a month back into your pocket, you could potentially afford your rent,” says McLachlan. “You could save up for a down payment, you could travel, or you could afford the very steep costs of university. It’s about owning less and living more. I think this concept is really being spurred by carsharing because it’s such a visible example.”

Along with providing extra cash at the end of the month, carsharing is also a boon to the environment.

According to a Metro Vancouver Car Share Study published in November 2014, up to three personal vehicles are shed per one-way carshare membership – like Evo or Car2go. And each household that dropped a vehicle because they signed up for a carshare service reported driving less as a result.

But those same trends become even more stark for Modo members. Every two-way carshare (such as Modo) removes between nine and 13 personal cars from our streets. The report also states that carshare households drive fewer kilometres annually than do non‐carshare households.

This is likely due in part because carshare drivers make use of more varied transit options. For example, in situations where carshare owners need to run out for short errands, taking the bus or riding a bike are potentially better options. Longer trips, on the other hand, suit using a two-way carshare far better.

“When you aggregate these different attributes, greenhouse gas reduction jumps to between 30% and 50%,” says McLachlan. “That’s huge. Add to that the ease of accessing a carshare vehicle during the work day, and leaving your car at home, and the environment thanks us even more.”

Dedicated parking spots in some of the busiest parts of the city? Check. Freedom to take your Modo vehicle wherever you need to, including over the border for a quick shopping trip? Check. And quite possibly the greatest peace of mind offered by a carsharing membership: the end of ownership responsibilities. Drivers no longer need to think about storage, gas prices, insurance or regular maintenance when they belong to a network like Modo.

“Think of Modo as your neighbourhood car. You pay only when you need it, not when you don’t. You can book a minute or a year in advance. And there’s no need to worry about where to drop it off, because every Modo has a home location,” says McLachlan. “You can get a little hatchback or hybrid. Cargo van or SUV. Whatever best suits your adventure.”

With so many choices at our disposal, the future of carsharing in Vancouver is looking bright. With car membership numbers rising, we’re bound to get more carshare vehicles on the road, which means Vancouverites will have one less cost (both financially and environmentally) to worry about.

Previous articleRunning out of gas: Four more Vancouver-area Esso stations up for sale
Next articleVancouver attempts to temper land speculation along Broadway Corridor