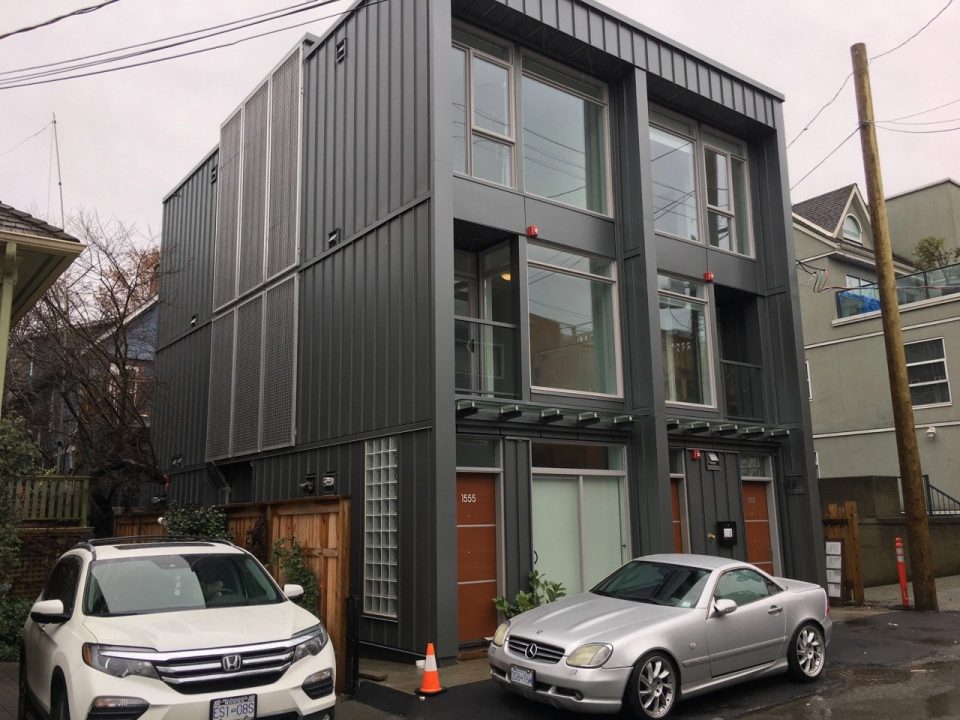 One of the first laneway rental apartment projects in Vancouver’s West End is now complete.

The three-storey, four-unit rental apartment building was constructed behind an existing home at 1546 Nelson Street.

It was designed by Ankenman Marchand Architects, who are also designing a similar infill project behind a nearby apartment building at Comox and Cardero.

The building’s address is officially on Henshaw Lane, one of the newly-christened West End laneways. The city is encouraging new infill rental apartment buildings along the West End’s laneways, with the aim of accommodating up to 1,000 new rental units.

According to a Craigslist ad, the two bedroom, two bathroom units are renting for $2,400 per month. Parking is on the street, and in the laneway.

The city named the laneway between Nelson and Comox Streets, and between Bidwell and Nicola Streets, as Henshaw Lane in 2014. However, there is still no street sign indicating the lane’s name. The city expects to have signage installed some time this year, much to the relief of pizza delivery drivers.

Despite the city’s desire to create more affordable rental housing in the West End, David Taylor, vice-president of Colliers International in Vancouver, said securing permits for the laneway apartment building took longer than the time needed to construct the building.

Sold this site in 2013. Only took four years for permits and construction! https://t.co/56TqpFjtFA

This past fall, the city announced it was naming eight more laneways after local historical figures. The newly-named laneways are as follows:

Eihu Lane
Existing lane located between Alberni Street and Robson Street which runs from Burrard Street to west of Bute Street, and from Jervis Street to Chilco Street

Stovold Lane
Existing lane located between Haro Street and Barclay Street which runs from Smithe Street to west of Cardero Street, and from Denman Street to Lagoon Drive

Jepson-Young Lane
Existing lane located between Comox Street and Pendrell Street which runs from Thurlow Street to Cardero Street, and from Bidwell Street to Stanley Park